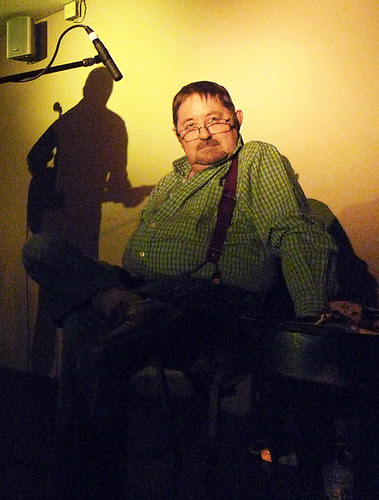 Swarb was the very first artist to appear at the Goose, in March 2008, and our opening night was a sellout!

We were also delighted that he was able to do a solo gig for us two years later at very short notice, after James Yorkston had to pull out for unavoidable reasons. That was on St George’s Day, and the gig was a Folk Against Fascism awareness-raising gig, as part of the national Folk Against Fascism Week.

Folk legend extraordinaire, brilliant fiddler and mandolinist, ex Fairport Convention, but maybe best known for his amazing gigs/albums with Martin Carthy. Possibly the only folk musician (or indeed anyone) to have had an obituary printed in the Daily Telegraph whilst, erm, not actually being dead……

Dave performed part of his set in 2012 with Kate Riaz and local lad Jake Wilson – both of whom we’re sure you will soon be hearing a lof more of (grammar)!

Jake subsequently went on to work with  Dave Swarbrick, who produced Jake’s first album “All’s Well”, and the next time Swarb came to the Goose Jake played guitar with him on stage.

We have since had Martin Carthy and Dave Swarbrick appear twice at the Goose as a duo – both being memorable gigs, particularly the second one which was our very first concert at The Ivy House after its reopening as London’s first community owned pub!

It was with great sadness that we heard about Swarb’s death in June 2016. It was an honour to have had him appear at the Goose six times, both solo and with Martin Carthy,  the last time just a year before he passed away.

We are also honoured to be asked to be the London hosts for the “Swarb! It Suits Him Well”  Tribute Tour in January 2018.