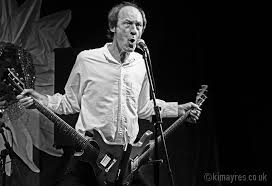 Well, John certainly didn’t disappoint the first time he came to the Goose – though we noticed remarkably few of our traditional folk fan supporters at this excellent gig in The Ivy House!

But hey, if Leigh Folk Festival can put him on their stage, so can we 😀

Shamelessly nicked from the programme of that very festival, here’s some blurb about John!

A manic presence, and a true “one-off”, John first became notorious back in 1977 after an appearance on the Old Grey Whistle Test with his former partner Wild Willy Barrett.

He had leapt astride Wild Willy’s amplifier, and lost his footing. One leg slipped on one side of the sturdy wooden piece of musical equipment, and the other leg down the other. The whole weight of Otway’s body crashed down on the most delicate parts of his body.

This sort of behaviour went down exceedingly well with the punk audiences of the time, and Otway was rewarded with his first hit “Cor Baby, That’s Really Free”, a recording contract worth a million in today’s money, and a sizeable live audience.

It took a little while, but a quarter of a century after that first record, John Otway was in the Top Ten again with “Bunsen Burner”, promoting him in a stroke to the hallowed pantheon of “two hit wonders.”

And now he’s coming back to The Ivy House! With Wild Willy Barrett! Our cup runneth over!