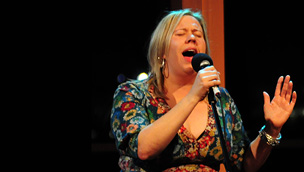 Brighton-based songwriter Naomi Bedford was first discovered by Orbital at a Brighton Party, and co-wrote and sang lead vocals on their 2001 chart smash “Funny Break.”

Since then, she has focused on her original passion for country and folk-spiced material, playing around the UK both with her own band and in guest appearances with The Men They Couldn’t Hang.

Her first album,  Dark They Were And Golden Eyed, was produced by Mick Glossop (Frank Zappa, Van Morrison, Sinead O’Connor etc.) The legendary Bonnie Prince Billy was delighted with her dark version of his song “Riding” which features on this album, and Del Amitri’s Justin Currie called her “An English Emmylou or an American Sandy Denny”. Confused? Us too. Let’s just say she’s got an amazing voice!

She has been described by Maverick Magazine as “…achingly expressive … totally captivating …. Original and quite intriguing ”

Naomi has appeared at the Goose with Paul Simmonds of The Men They Couldn’t Hang as a support to Dick Gaughan and headlining at the late lamented Hoopers Bar,   and now returns in 2016 to headline a concert in her own right.